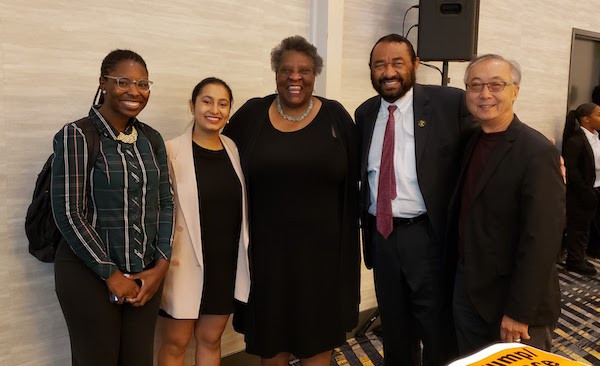 At our impeachment town hall in Oakland on Saturday, Congressman Al Green announced that he would be introducing articles of impeachment related to Donald Trump’s racist abuse of power.

“The President can be impeached for his racism, for his bigotry,” said Congressman Green. “When I go back to Congress, I plan to push for impeachment [on] issues and articles above and beyond what has happened in Ukraine because if don’t impeach him for these other things, there will be those who will say he never committed these impeachable offenses!”

Congressman Green referenced articles of impeachment against President Andrew Johnson for Johnson’s racist rhetoric and said we should do the same for Trump.

Eva and Bill performed a rendition of Marvin Gaye’s “What’s Going On” – and Congressman Green jumped in as well (at 1h 53m in the video)!

The Equal Justice Society, California Civil Rights Coalition, Free Speech for People, By The People, and Vigil for Democracy, sponsored the town hall.

Ask your Member of Congress to add racist abuse of power to Trump’s Articles of Impeachment. The democracy.io website has a tool to find and contact your Members. You can also join Free Speech for People’s call to expand the scope of the inquiry bit.ly/fsfpexpand.

EJS would like to acknowledge the following for their assistance with the town hall: Karla Hudson, Harrison Haigood, Kwentoria Williams, our esteemed panel of presenters, the incredible teams at Free Speech for People, By The People, and Vigil for Democracy, Shelia Williams and Carla Lopez from the Marriott Hotel, and to Justin Hendrix and A.E. Marling for the livestream!